Pensioners and retirees are in an uproar here in Japan over a recent report by the Financial System Council. The study revealed that elderly couples (males over the age of 65 with a wife who is 60 or over) whose income is dependent on social security pensions are short an estimated ¥20,000,000 or USD $184,000 in income if they expect to live to 95 years old. This is the estimated total for thirty years.

Debate of this shortfall is rampant. Some officials have then suggested that people are going to have to start saving for their own retirement–which is what we’ve been told a lot in the US.

Government officials have had to reject this study that they had requested because people are going crazy over this sum of money that they don’t have or won’t be able to cover. Interviews among elderly people show them worrying about coming up such a big amount of money. 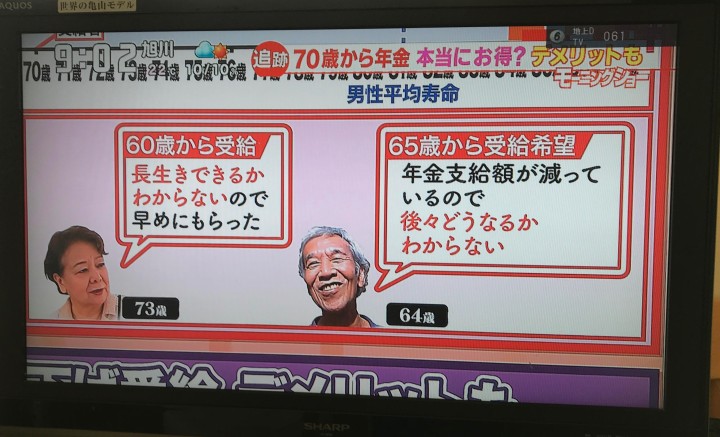 The talk shows have had a field day over the whole issue. One of the shows featured economists on the panel as the host asked a whole bunch of questions. There was also a specialist on hand to explain the situation in more detail.

At one point, the host asked the celebrity guests if any of them are investing. None of the people raised their hands. Now, these are people usually on TV and are pretty famous. Presumably, they should be making more money than the average person. However, none of them were investing in stocks. Actually, one guy said he did have some stocks on hand, but when he went on to discuss it, it seemed like it was invested in single stocks and not necessarily a diversified fund.

The celebrities then said that they didn’t know where to start. They also have a lot of fears if they lose all of their money.

So this made me think that a lot of these people are saving their money in regular savings account that are not even keeping up with inflation.

It also shows how very illiterate Japanese people are when it comes to financial issues. It’s so surprising. It also goes to show you how people are so reluctant to talk about money in public.

I also know how they’re feeling. When I first started my journey toward financial independence, I didn’t know where to begin, either. But at least I knew that I had to do something about it. It was definitely my responsibility to save for my own retirement.

I don’t want to judge, but this news made me realize how much I need to save as much as I can now so that I don’t depend on the government for my retirement. When I plug in my numbers in retirement calculators, I usually don’t include social security in any of the calculations.

First, I don’t know which one I will get. Will it be from the US social security or from the Japanese Nenkin system? Second, I also know that both governments are in trouble managing their debt. Will there be any money for our generation when it comes time to get our own social security checks. I’m not so sure. In order to avoid relying on them, I just don’t even include any amount when I calculate future retirement savings.

In any case, if I get it the future, I will be happy. If not, I hope I saved enough to cover my needs in the future.

Now it’s driving me to save more than ever. I will do my best to save for retirement on my own.

Kyle Westaway
I Will Teach You To Be Rich