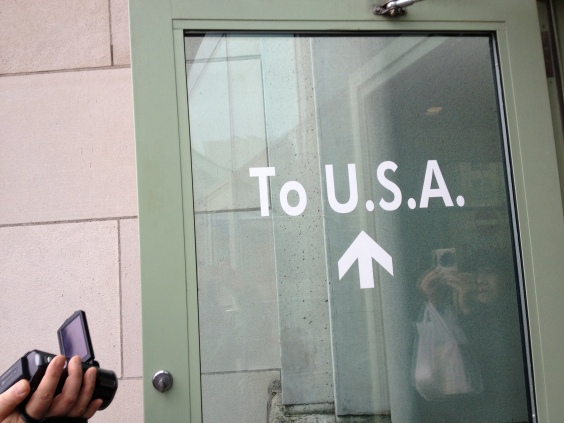 In June, I went on vacation and went back to the US for a visit. I had the opportunity to go back home for ten days. My nephew was graduating high school and it was one of those milestones that the whole family celebrated. I wanted to witness him finishing high school surrounded by family and friends.

Though it was a short visit, I couldn’t help but feel a huge difference in my actions. What I would have done in the same situation had I been in Japan was different from what I did when I was in New Jersey.  Granted, I was on vacation so I wasn’t really thinking clearly, but still–I should have known better than to completely lose control.

One of the things I noticed was the over-reliance on driving. Since I live in Japan, I walk everywhere and have to rely on public transportation. This meant that anything that I had to buy, I alone had to carry home. I also had to be aware of the tight spaces if the trains get crowded. Trust me, if your backpack is bulging and you have a shopping bag of shit in a crowded Japanese train, you feel like the biggest loser in the world. If the weather was nice, I could use my bike, but the rack on the bike is quite small. All this means that I have to cut down on a lot of purchases. I don’t always want to lug a heavy load home all the time.

In the US, because we lived in the suburbs, we needed a car to go everywhere. I noticed myself buying a lot more than I needed. I easily made a purchase–or maybe several purchases–and threw the bags onto the back seat. So much space back there! I didn’t need to think about how I was going to carry it home. Why bother thinking about my heavy load when there was a car?

Another thing I noticed was how people easily relied on convenience–especially when it came to food. For example, after a day out, nobody felt like cooking at home so we would either order food or go pick it up. Again, because we had a car to do this, this became so easy and such a bad habit–in such a short time.

Eating out was also a part of this. Every time I made plans to meet up with friends and family, the first thing everyone suggested was meeting up at a restaurant. We didn’t go to very expensive restaurants, but we did order more food than we should have. Between the appetizers, the entrees, the desserts, and the drinks, we easily spent 50 bucks per person. That doesn’t even count the tip.

I don’t usually eat out in Japan. Even if I did, the food portions are small and just enough to feed my appetite. Most restaurants also have a deal where you can get a combination of soup and salad with the entrée. Sometimes they’ll even throw in dessert with these combos. And the best part is that there is no tipping in Japanese restaurants–al for about ¥1000 or less than 10 USD.

In addition to all of that, I forgot how most people in the US pay for their purchases with credit cards. In Japan, I usually pay for everything in cash–which I prefer, honestly. I like dealing with the paper bills and the coins. It makes the whole thing more “real” and I am aware of the money that leaves my wallet. However, in the US, every purchase I made was with a credit card and I didn’t even blink when my total came up to $200. After all, I didn’t need to pay for it with cash so it didn’t hurt as much.

This made me realize how my life seems to be more efficient when I am in Japan. Maybe it’s because I’ve been living here for so long and I’ve gotten used to the way people do things here. I just feel like I am a better manager of my resources when I have to be more conscious with the way that I use my time and my money.

Yes, I was on vacation for a few days and probably indulged a little too much. Being out of Japan meant that I didn’t need to be as strict with myself as I should have been. However, I also think that the ready acceptance of consumerism and over-indulgence in the US made me feel a little bit more free with my spending.

I don’t know, though.

Of course, this could all be in my head, too.

To make everything more certain, I would love to do another comparison when I get the chance.

Maybe I should book another trip back to the US?

Kyle Westaway
I Will Teach You To Be Rich